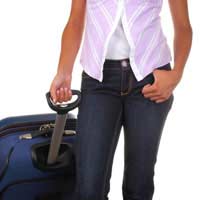 Package holidays are the old fashioned, simple way to get away from it all and relax in luxury for as long as your salary and your annual leave will allow. It's certainly the easiest way to take a trip, and despite the advent of budget airlines and traveller independence, it's still possible to get good value for money.

You don't have the time or the inclination to plan ahead or do much research into your destination, in fact, you probably don't even mind where you go, as long as you have a good time, get to relax and get a sun tan out of it. It's interesting to see that in this world of information and mobility the high street travel agent still exists. It doesn't just exist, it thrives.

It still exists because there's still a large number of people who just want everything to be taken care of without having to organise it themselves - and because travel agents are, by definition, the oil that greases the inner workings of the whole travel industry. And it's hot competition out there - whether you're looking for two weeks on a beach or a round the world trip, there are hundreds of package deals out there for you.

Using their buying power to get deals right across the board that an individual traveller could never dream of, and perhaps more importantly, paying strong attention to growing trends, they're able to invent package holidays you never knew you wanted!

Package holidays do have their pitfalls however. For a start, a sizeable portion of travel agents' negotiating power comes from the fact that they pay for good rates long in advance - which means they're eager to make that back as soon as possible in the form of a deposit from you. So there's usually very little flexibility at all for the client.

If there's anything you don't like about the place, it's pretty much tough. You can only really get out of it if there's something substantially wrong with, for example, the hotel, or if the trip really isn't what the package says it is.

Package Holidays and the Solo Traveller

Although the package holiday may not be everyone's cup of tea, this is at least one kind of trip in which the solo traveller can actually get a comparatively good deal. It may not be the cheapest deal, but you can get value for money, thanks to the large and still growing portion of the market that lone travellers now account for.

For example, if you take a budget flight to Paris for a city break and book a single room over the internet, you'll get precisely that: a flight spent with your legs around your neck and a bed for a few nights, followed by a croissant and a cup of coffee in the morning. Now, for a few pounds more, a travel agent may get you a great weekend deal on a four-star business class hotel in Milan, with complimentary drinks on the plane and free access to the health spa and gym when you get there.

Other similarly good deals really are available so shop around and don't settle for second best - and keep your eye open in particular for deals aimed at solo travellers. The more flexible you are, the more chance you have of stumbling across a real bargain. We don't like to name names here on TravellingAlone, so instead we'll just give you a couple of examples of package tours to be found if you know where to look: