Home > Planning > When Your Child is Travelling Alone

When Your Child is Travelling Alone 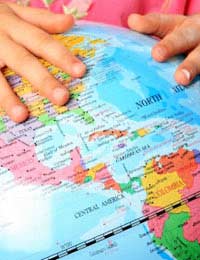 When your kids have to go somewhere away from home – meaning another city or country, perhaps to visit relatives, rather than simply taking the bus to town or school – it’s always best if they can be accompanied by adult. But sometimes that’s not possible. Your child might be forced to take a train or an aeroplane as an unaccompanied minor.

It happens more regularly than people might imagine, and companies are used to children travelling alone – in the case of airlines, many have special provisions for it. But even where there’s no official structure in place to help, there are steps that can be taken to ensure your child reaches his destination safely.

Obviously, your child needs to be a certain age to travel alone, especially for train travel. But from the age of around 10, it can feasibly be done.

Train travel is a very safe way to go from one place in the UK to another. That’s true even for a child travelling alone, as long as some basic precautions are followed. Obviously, you should accompany them to the station, and have full details of where they’re going (including any changes of train they might need to make along the way). Make sure this is safely packed on their person.

You also need to be absolutely sure someone will meet then at the end of their trip, and be able to stay in contact with that person. It’s a very good idea to make sure your child has a mobile phone, with both your number and the other person’s programmed in, and with the phone fully charged and having plenty of credit in case of any problems.

At the station talk to a member of staff from the train, who should be willing to keep an eye of your child as he travels alone. Make sure there are a number of people in the carriage, which adds to security. If they need to change trains, write down where, and ensure they know how to find the information booths in the station for directions. You can call the mobile and check on your child at various points during the train journey to ensure things are going smoothly, and make sure the other party calls you after the child arrives safely.

A number of airlines do have an unaccompanied minor policy, by which children can travel alone on aeroplanes under the eye of cabin staff. Your child is escorted through security, and, if going to another country, he will be met by a ground staff member and escorted again through customs and immigration, with the adult meeting him at the other end having to sign for receipt of your child.

Airlines do charge for the service, but for the piece of mind it brings, the relatively small fee is more than worth the price. For legal reasons you’ll have to leave your child before he goes through security, but if your child has a mobile you’ll be able to keep in contact until he’s on the aeroplane (although obviously you want be able to talk while the plane’s in their air, but you’ll generally be able to talk after landing – as long as your child remembers to turn the mobile on again!).

As a general rule you will need to remain at the airport until the flight departs, in case there are any problems. If you’re the party meeting the child, arrive in plenty of time, and make sure your mobile is on.

Travelling alone can be a great adventure for a child, whether it’s by train or aeroplane. Emphasise that part of it, and the fun they’ll have. Caution them about dangers, by all means (that’s just good parenting), but don’t build them up to the point where your child becomes fearful. That way they can travel alone and fully enjoy the trip!