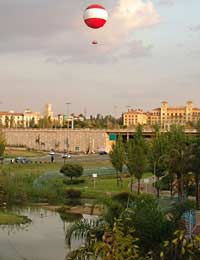 Wild, dangerous, exotic and absolutely unrivalled in awe-inspiring natural beauty, the plains, deserts, jungles and mountains of Africa represent the only truly undiscovered place on earth for the recreational traveller.

This amazing and utterly unique continent offers a guaranteed culture shock, and promises that you will learn more from a trip to this magnificent place than you will from anywhere else in the world.

This stunningly beautiful and thoroughly intoxicating continent leaves visitors forever changed. They say Africa gets in your heart and in your blood, so be prepared for this unusual, raucous and often savage part of the world to blow your mind.

From the Arab countries in the desert plains of the north and the dangerous and war-torn former French West Africa, to the stunning and vast safari lands of the south and east and the soon to be World Cup hosts, South Africa, the continent of Africa truly is the garden of the world.

Visa regulations for African countries vary so much that they cannot be easily summarised here, only to say that requirements range from no visa at all for British citizens to visas being obtainable only in advance from the relevant country's representation in the UK. For a list of such offices, visit the Foreign & Commonwealth Office (FCO) website.

The FCO site should also be monitored closely for updates on politically volatile areas and the dangers associated with each country in Africa.

It goes without saying that full vaccinations are in order as is full medical insurance that covers the possible eventuality of an airlift to the UK or South Africa. Consult your GP at least eight weeks prior to your trip to find out what jabs you need. They'll almost surely include Hepatitis A and B and Yellow Fever. Certification of having had these jabs will serve you well too.